This exhibition examines the work of established and emerging international contemporary artists who use a variety of strategies to bring a sculptural dimension to printmaking. Some achieve this by using centuries-old methods while others take advantage of cutting-edge digital tools. These include low relief printing or embossing, printing on mold-cast paper forms, post-print cutting, scoring, folding, etc., art installations that use repeated print elements, relief printing through repeated print runs to accumulate layers of material, and printing out imagery that is applied to 3D forms. LIFT: Contemporary Printmaking in the Third Dimension examines recent developments aimed at extending the physical and conceptual possibilities of the print as defined by an international slate of established and emerging artists. The works in LIFT incorporate new materials and digital tools, as well as traditional approaches applied in innovative and unexpected ways. These adventurous works reflect the range and vitality of experimentation within printmaking today.

Three-dimensional printmaking is completely different from and not to be confused with 3D printing, which generally refers to extruded objects that are manufactured using automated digital printers in an industrial setting. The works in LIFT were conceived and produced by artists in a studio context and designed as art objects. A few of the featured artists are experienced printmakers, while most are better known for their achievements in other media. Many rely on assistance from master printmakers, who provide specialized equipment, technical expertise, and creative input. All of the artists in LIFT employ a variety of strategies—centuries-old as well as digital—in order to extend their work into the third dimension.

Four artists bend, fold, stitch, or splice their works in order to give the original flat paper surface a sculptural profile. Sculptural printmaking pioneer Red Grooms conceives vibrant narrative lithographs that are printed in parts, and then cut, folded, bent, and assembled so that key features protrude into the viewer’s space. Hideki Kimura arranges small folded and cut inkjet print dioramas on transparent shelves that extend into space in order to interact with light and shadow, yet without sacrificing the integrity of the single paper sheets from which they were created. Mixed media artist Lesley Dill cuts, folds, and stitches her printed imagery in enigmatic figurative works inspired by the symbolic and visual potential of language to express the human soul. A self portrait lithograph by Jane Hammond takes the form of a mummy case shaped into full relief using bent and folded paper panels whose gilded surface is adorned with a mixture of hieroglyphics and pictograms taken from the artist’s 276-part lexicon of symbols.

Other artists produce their sculptural works by screen-printing imagery onto non-traditional materials or by presenting it in non-traditional arrangements. Graciela Sacco creates one-of-a-kind prints by transferring appropriated photographic imagery onto various found objects using light-sensitive chemicals in ways that amplify her social commentary.  Dieter Roth, credited with being the inventor of the artist’s book, is represented by a stamp kit he designed so that audiences could participate in his in-depth investigation of the relationship between language and image. Andy Warhol-inspired prints by Enrique Chagoya are adhered to soup cans and slot machines to create playful points of entry into difficult issues such as political corruption and cultural imperialism. Jonathan Stanish combines his interests in ceramics and printmaking by applying geometric glaze patterns derived from traditional Native American art onto wet ceramic slabs that are then shaped by hand to resemble windblown textiles. Oscar Muñoz transfers portrait imagery onto paper fragments floating on water using charcoal dust in unique time-based works inspired by notions of vanity, the passage of time, and the fragility of life. In an interactive installation by Leslie Mutchler, printmaking is a catalyst for a communal dialogue between artist and audience in which meaning is generated through the shared activity of assembling a sculptural print rather than by its material product.

Another means of creating three-dimensional works is through the layering of multiple print elements. Marilène Oliver translates digital medical scans of her parents’ bodies into screen prints on acrylic sheets stacked in order to construct ghostly doppelgängers. Installation artist Olafur Eliasson presents an oversized book containing 908 laser-cut pages depicting a sequence of precise vertical sections of the entire interior space within an elaborate early twentieth-century house—in this case, his childhood home in Copenhagen. Nicola López overlays a series of large monotypes and laser-cut mylar sheets to produce one-of-a-kind images that reveal the intricate inner workings of monumental structures derived from the contemporary industrial landscape. Robert Gober, who frequently uses print media in his installations, presents a photolithograph of himself disguised as a young bride in a newspaper advertisement atop a bundled stack of prints simulating used newspapers awaiting disposal.

Organized by the Knoxville Museum of Art. The KMA wishes to thank Beauvais Lyons, Chancellors Professor, School of Art, UTK, for his assistance with the exhibition.

Additional financial support provided by the University of Tennessee, Knoxville School of Art. 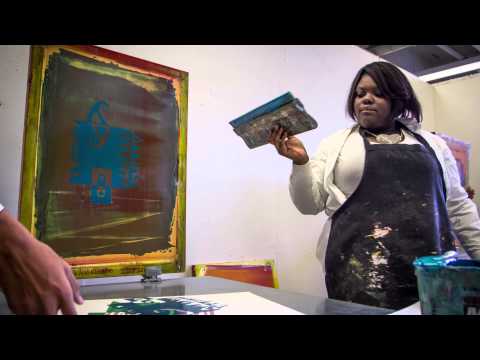